Welcome to our architectural review newsletter.  This up-close look behind the scenes and the mind of Harry Gandy Howle reflects how each finished home is a project of energy and enthusiasm that represents an intense level of attention to details. 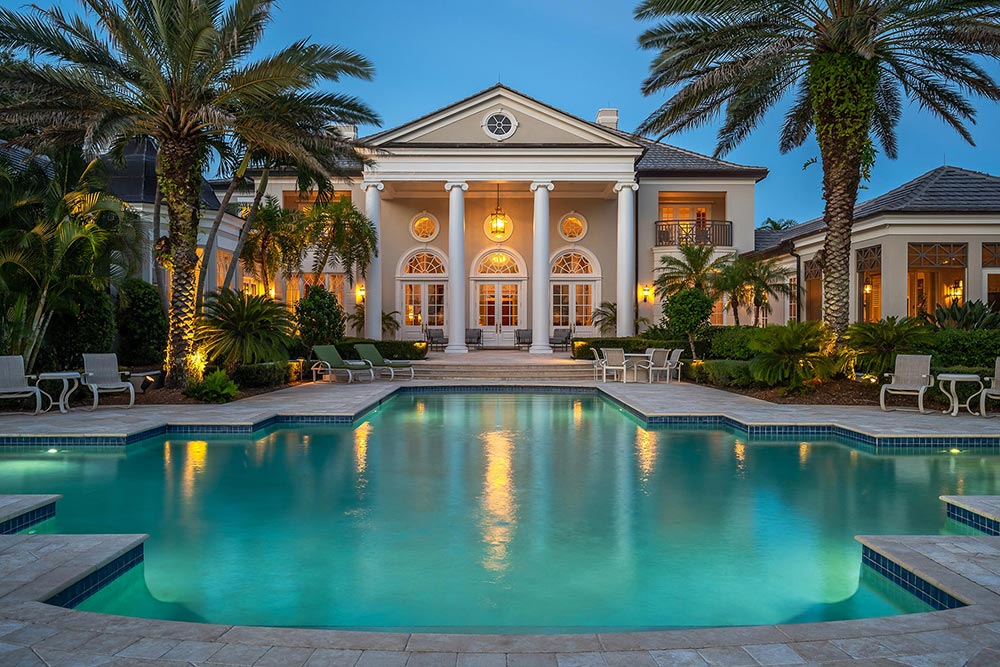 This design masterpiece and beautifully built home remains one of the most graceful homes on Gem Island.

q:
This Gem Island home is a grand representation of Classical architecture. Can you tell us more about its design elements?
a:

I loved designing this home because it gave me the opportunity to delve back into the four orders of architecture. Nothing was spared on the exterior to keep the Ionic order true to its roots. It has very Classical elements that maintain symmetry, rational order and calmness. While Classical architecture is bold, it should also reflect humility and intellect – qualities that were cherished by the Classical civilizations. For example, in the interior, when you look at the relationship of this home’s arches to its Corinthian columns, you’ll immediately see how they are perfectly orchestrated and symmetrical. And the elaborate, repetitive groined vaults in the gallery ceiling not only make a bold design statement, it allowed us to add three symmetrical windows that mirror the windows on the opposite side of the living room – adding even more natural light to the central living area.

q:
Are environmental issues and sustainable designs important to your work, and was it a challenge for building this home?
a:

I believe that architecture should be completely anchored in its site and deeply rooted in its surroundings to the point it’s unfazed by the changing of styles and times. When we designed this home in the early 1990’s, environmental protection issues were followed and coordinated with the Florida Department of Environmental Protection. But sustainability was not generally part of public discourse or truly important to most residential clients to the degree it is today. I take pride in the fact that we built this home more than 20 years ago and every precaution was taken to ensure the land was appropriately utilized, trees preserved, and the natural surroundings were taken into consideration for how the home was designed and built.

I served on both the John’s Island and Gem Island Architectural Review Committees and we were meticulous about ensuring every home had plenty of green space for the long term – each Gem Island home looks across greenery or water. In fact, John’s Island bought conservation areas to offset development in perpetuity for wildlife.

q:
How did your involvement with the Gem Island Architectural Review Committee influence design and development?
a:

I was instrumental in advancing the design criteria for Gem Island and was extensively involved in developing architectural standards for the Gem Island Architectural Review Committee. Architectural vernaculars included French, Georgian, and Plantation style. As with this custom home, many homes on Gem Island have large porches and verandahs that not only keep within the prescribed styles, they also allow for unobstructed views of water, wildlife and the natural terrain. And that was absolutely by design. We ensured that each estate was thoughtfully designed and built around three primary site characteristics: the view, the prevailing coastal breezes, and the sun’s path. I consider my time with the Architectural Review Committee well spent, because Gem Island today is one of the most beautifully developed and preserved areas on Florida’s east coast.

q:
In addition to the Classical architectural elements, what other aspects are particularly noteworthy?
a:

Numerous design elements are noteworthy in this home, right down to the mahogany wood in the library-quality master closets. The homeowners wanted suites for their family members and plenty of room for entertaining, and this had a big impact on the size of the home. As a result of how we positioned the five suites, the central living area – with its 24’ ceiling – is a grand venue for entertaining without disturbing the private suites.

The living room murals were designed by my son, Glenn. He sketched them by hand and a Palm Beach muralist beautifully painted and installed the opposing murals. All of the moldings throughout the home were custom made by expert craftsmen at Driwood Custom Millwork in Florence, SC and are in accordance with today’s Architectural Woodwork Institute (AWI).

q:
A home of such scrupulous design and size can be a building challenge. Did you encounter problems during the building phase?
a:

The home was an absolute delight to design and build. The clients took a personal interest in every aspect, and they sincerely appreciated the artistic elements that are so important to building a “classical masterpiece.” Working alongside Paul Parent, the General Contractor, was equally enjoyable. He didn’t cut corners and he understood the importance of staying true to the architectural design. This residential design-build project is an outstanding example of how superior design can stand the test of time.

View the Project Gallery
Sign up for future issues of HGH Review and other inspirational news.
Thank you! Your submission has been received!
Oops! Something went wrong while submitting the form.